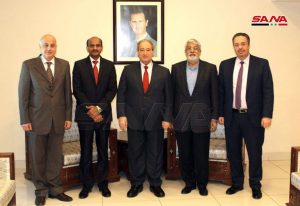 Mikdad, meeting Indian Ambassador in Damascus, Hifzur Rahman, and director of international operations at “Jaipur Center for artificial limbs,” Satish Mehta, welcomed the Indian generous assistance to the Syrian people who lost their limbs in the terrorist war on Syria.

For his part, the Indian Ambassador stressed his country’s support to Syria in its war against terrorism and providing aid to the Syrian people.

Meanwhile, Mehta briefed Mikdad on the progress made in implementing a project of prosthetic limb fitment in Syria for those who lost their limbs in the terrorist war on the country.

The two sides also discussed expanding that humanitarian project to include all the Syrian provinces and training the Syrian cadres operating in this field.

Mehta said that Jaipur for artificial limbs center will provide scholarships to train a number of specialists on manufacturing prosthetic limb fitment.

Clashes erupt among Erdogan’s mercenaries, US occupation sends reinforcements to its bases and Qasad

Nasrallah: Hezbollah never stored anything at Beirut port, impartial investigation must be held into disaster