Azzam offers condolences over martyrdom of Soleimani and his companions

Commissioned by President Bashar al-Assad, Minister of Presidential Affairs Mansour Azzam on Sunday offered condolences over the martyrdom of Leader of al-Quds Failaq Lieutenant General Qassem Soleimani, and a group of his resistant companions from Iran and Iraq at the Iranian Embassy in Damascus 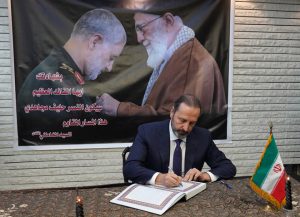 Azzam wrote a word in the record of condolences, in which he conveyed the sincere condolences of President al-Assad and the Syrian people to the Leader of the Islamic Revolution in Iran Ali Khamenei, the Iranian leadership and people, and the families of the martyrs

Azzam said in a statement to journalists that the US aggression, which led to the martyrdom of Lt. General Soleimani on the brotherly land of Iraq is a violation of the international law and diplomatic norms

Azzam affirmed that the martyrdom of Lt. General Soleimani and his companions is a great loss for all peoples defending the sovereignty of their lands

In cooperation with terrorists, TMO loots Syrian wheat and barley crops from farmers