Homs Customs confiscated on Tuesday weapons and munitions hidden inside a car coming from Daraa to Idleb countryside. 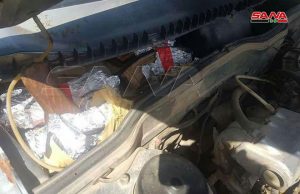 A source in the Customs department of Homs told SANA that members of the Customs seized a LADA car at the crossroads of Qseir to the south of Homs coming from Daraa and bound to Idleb countryside.

The source added that a quantity of weapons and munitions were hidden in a secret cache in the car including two rifles, munitions and a pistol in addition to an amount of money.

Two men were arrested in the operation.

Health Ministry: One Coronavirus patients passed away, 4 others recovered