Activities of the 32nd edition of Moscow International Book Fair continued on Friday with participation of Syria, 33 countries and hundreds of Russian and foreign publishers and printing houses. 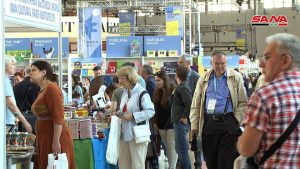 Moscow International Book Fair opened its doors on September4 in Moscow and will last to September 8th.

Russian President’s Special Representative for International Cultural Cooperation Mikhail Shvydkoy said, at the opening ceremony of the fair, that Moscow Book Fair is considered as one of the biggest international cultural events in the field of publishing books, pointing out the large turnout the fair is witnessing.

In a statement to SANA correspondent in Moscow, Director of the Syrian pavilion at the Fair Alaa al-Mahdi described Syria’s participation in the Fair for the third year as “very valuable”, stressing the Russian visitors large turnout to the pavilion.

President al-Assad issues decree No. 125 that amends articles in the Law of regulating universities

Foreign Ministry: EU decision to renew coercive measures on Syria unveils the falseness of the stances and statements of its officials

Health Ministry: One new coronavirus case registered in Syria to raise the total infections to 122