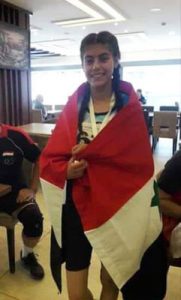 In the first day of the Championship, Shaaban ranked first and won the gold medal at the 5 kilometers race walk for junior female athletes as she outperformed her peers from eleven states.

The Championship will last till August 18th.

FM: US dismay over return of normal life in Aleppo is due to its frustration and bitterness over failure of its project

General Command: Any violation of Syrian airspace will be dealt with as external military aggression

Army continues operations against terrorists in countryside of Idleb, Aleppo, destroys their headquarters, equipment and vehicles