President al-Assad was accompanied in the prayer by the Minister of Religious Endowments (Awqaf), Grand Mufti of the Republic, a number of senior officials, People’s Assembly members, religious scholars, and a number of citizens 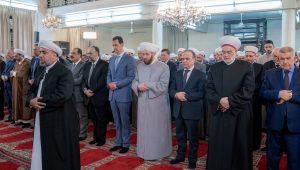 The prayer was led by Sheikh Hassan Awad  who delivered the holiday sermon, in which he talked about the sublime meanings of Eid al-Adha  which teach people  how to be patient in difficult times and which consolidate the values of sacrifice for defending the dignity and safety of the homeland

Sheikh Awad indicated that the Eid makes us remember the day on which Prophet Mohammad (PBUH) stood at Arafat to teach humanity the lofty ethics and the rules of justice, love, amity and cooperation among the people, while today there are some of those who are distorting the right religion through their extremism, criminality and terrorism

He affirmed that those who do that don’t belong to the gracious sharia of Prophet Mohammad who taught the nation the language of dialogue and thinking and how to work for realizing peace, security and stability not the killing and the destruction

“You have led the homeland in the most difficult circumstances and you have been steadfast and we have been steadfast through you, and God made you triumph and he made the homeland triumph over terrorism through the sacrifices of our heroic army which has been engaged in the fiercest battels against terrorism and its backers,” Sheikh Awad said addressing President al-Assad

Awad concluded the sermon through praying for God to protect and grant success to President al-Assad, and to aid our brave army , have mercy on its martyrs and heal its wounded personnel and to restore peace and security to Syria