Several persons were injured on Thursday in an terrorist explosion of a car bomb near the church of the Virgin Mary in Qamishli city in Hasaka Province. 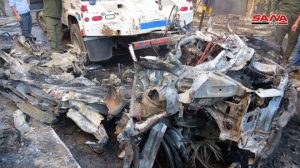 SANA reporter said that terrorists detonated a car bomb in Qamishli city near the church of the Virgin Mary, injuring 11 civilians and causing material damage to parts of the church, shops and cars.

On June 23rd, two persons were wounded in an explosion of a motorbike explosion at the western entrance of Qamishli.

Sabkha clans: We strongly support any resistance to liberate the Syrian land from any occupation