Embassy of Venezuela holds reception on anniversary of independence day

Embassy of Venezuela held a reception on Monday at Dama Rose on the 208th anniversary of independence day. 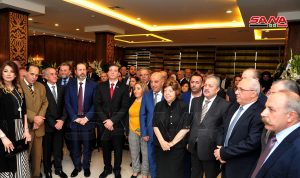 Vice-President Najah al-Attar and a number of Ministers and senior officials attended the event.

Venezuelan Ambassador in Damascus Jose Biomorgi said that his country will remain resistant in the face of pressures and challenges to which it is exposed by the US, the same as Syria which has opposed the terrorist war since more than 8 years.

He appreciated the victories achieved by the Syrian Army against terrorism.

Assistant Foreign and Expatriates Minister Ayman Sousan, for his part, affirmed that Syria and Venezuela have the same approach in their adherence to sovereignty.

He reiterated Syria’s support to Venezuela against the foreign interventions and appreciated Venezuela’s stances in support for Syria against terrorism.

Demonstrations in al-Shaddadi in protest against QSD militia crimes