Units of the army and competent authorizes, in cooperation with locals, discovered on Wednesday a den that was recently prepared to be a center for Daesh terrorists in Deir Ezzor badiyah (semi desert ) to the east of the city. 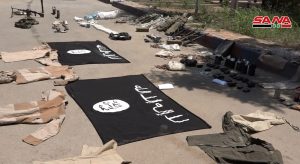 SANA reporter said that through acts of detection, the army seized a site which seems to have been used by Daesh terrorists to coordinate their operations in Deir Ezzor countryside as attacks of Daesh remnants have increased lately.

The reporter added that different munitions, Israeli-made bombs, communication sets and RPJs were found in the cache.