The Syrian Embassy in Moscow organized a ceremony on the occasion of the 73rd anniversary of the Evacuation Day, in cooperation with the National Union of Syrian Students, Moscow branch, the Syrian Community in Russia, the Commonwealth of Independent States and The Baath Arab Socialist Party.

Speeches of the participants  focused on the long struggle of the Syrian people against the aggressors that was crowned by the evacuation of French colonialism from our Holy Land, emphasizing that Syria has become impregnable rock in the face of the colonial schemes, the last of which was the global terrorist war being waged against Syria.

They stressed that Syria will ever remain the impregnable fortress in the face of any aggression that tries to defile its pure land, and that every inch of Syria’s land will be liberated of terror and hatred including the occupied Syrian Golan. 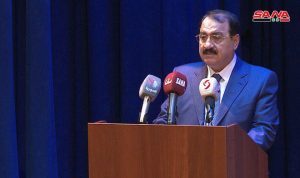 Syria’s Ambassador in Moscow Riad Haddad said that the evacuation anniversary comes this year in coincidence with the most heinous war waged on Syria.

Ambassador Haddad added that the Syria’s victories over international terrorism and its achievements in terms of reconstruction, economic recovery and the return of the displaced people to their homes, had pushed the camp of aggression, led by the US, to move to the second phase of its war on Syria which is the economic one in an attempt to achieve what they failed to do by military war.

Lavrov discusses with Shoukry efforts to settle the crisis in Syria

Turkish occupation and its mercenaries attack with shells Hasaka countryside