The authorities uncovered a minefield that had been plated by Daesh (ISIS) terrorists in farms 25 km west of Palmyra (Tadmur) city. 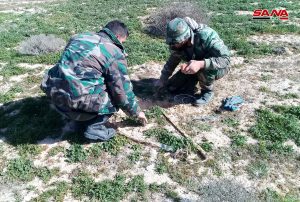 A source told SANA’s reporter that during canvassing operations in the area, the authorities uncovered a minefield that had been planted without various types of landmines and IEDs by Daesh, including anti-tank, pressure-sensitive, and remote-detonated IEDs.

The source said the landmines had been planted in four lines, each 3 km long across a width of 800 meters, adding that these landmines include internationally-banned explosive materials.

The army’s engineering units started dismantling the landmines and carrying out remote detonations of them to clear the area, the source added.