Talks during the meeting touched on the historic friendly relations between Syria and the DPRK and means to enhance them. 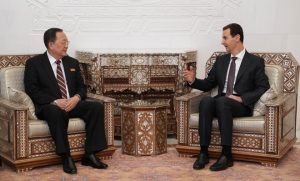 Minister Ri relayed to President al-Assad and the Syrian people a verbal message from President of the DPRK Kim Jong-un, expressing his country’s firm support for Syria and offering congratulations over the victories achieved in the fight against terrorism, in addition to voicing confidence in Syria’s ability to succeed in the reconstruction process because it will be built on solid basis of political and military success.

The Minister also briefed President al-Assad on the basis of the DPRK’s foreign policy, noting that the enemy which the DPRK, Syria, and all states that reject hegemony and foreign interference is one and the same, which requires increasing coordination among these states to confront foreign plots.

President al-Assad said that despite the difference in the forms of the wars and pressure to which Syria and DPRK are exposed, their essence and purpose is the same; to weaken the countries that have independent decision and stand in the face of Western projects.

He added that these wars are not just about Syria and the DPRK; they are wars for redrawing the map of the world. 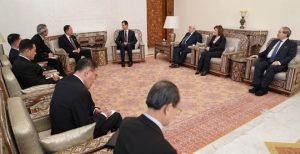 President al-Assad said that the American hostility towards all the independent states knows no geographical limits, adding that the defeats of Western projects and the steadfastness of independent countries such as Syria, the DPRK and others are capable of changing the international arena and restoring balance to it.

President al-Assad issues decree No. 125 that amends articles in the Law of regulating universities

Foreign Ministry: EU decision to renew coercive measures on Syria unveils the falseness of the stances and statements of its officials

Health Ministry: One new coronavirus case registered in Syria to raise the total infections to 122